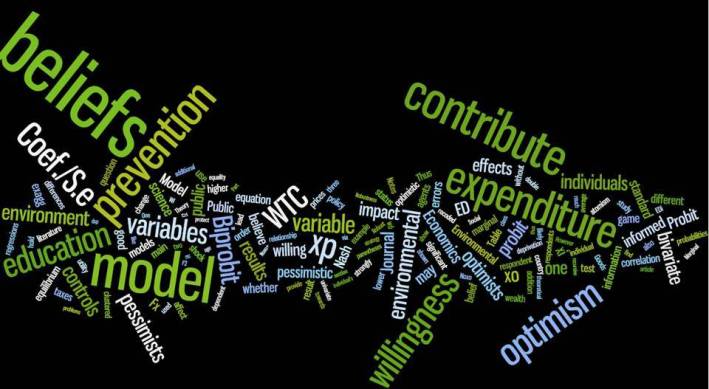 I am happy to announce that my article “How Beliefs Influence the Willingness to Contribute to Prevention Expenditure” is forthcoming in the journal American Journal of Agricultural Economics. In this article I show the following:

So why is this important or interesting? To my knowledge, the role of beliefs for the willingness to contribute (WTC) to prevention expenditure has been studied little to none. Most articles look at socio-demographic determinants, like age, sex, income, education, etc. But it should be clear that all of these should impact the willingness to undertake prevention expenditure only (or mostly) indirectly, insofar as they impact a person’s beliefs. If I believe that a river is strongly polluted, then I am obviously much more inclined to support clean-up measures than a person who believes otherwise. A more educated person who keeps himself informed about issues like water pollution should thus be WTC to prevention expenditure not because he is more informed about the water pollution, but because this information impacts his beliefs about the water pollution.

Thus, variables like education should only (or mostly) impact the WTC indirectly via affecting beliefs. To know that this impact works only indirectly is very important, because it provides us with causal information on the channel of impact. Think about it this way: Imagine someone tells you that Mr. Waffles is a great baker and he shows you one of his cakes. Observing just Mr. Waffles and the cake does not give you any information on how to actually make the same cake. You need the recipe in order to reproduce or improve the cake. And the same holds for education and the WTC: Observing a highly educated person with a high WTC is not enough if you want to change his WTC.

In this article we find that the most important determinants of a person’s WTC to prevention expenditure are his beliefs, and one of the determinants of the beliefs is education. Hence, if a policy maker wants to change a person’s WTC, then he may either attempt to improve a person’s education level, which may be costly and time-consuming, or he may target a person’s beliefs directly via other channels, like dedicated, directed information about specific environmental issues.

Apart from the empirical results, I also discuss some ethical connotations. In particular, I show that optimists, i.e. those who believe that environmental problems are negligible, are WTC less than pessimists. This we, for example, see when it comes to international climate decisions, such as emission reductions. The EU tends to be rather pessimistic about climate problems, while other countries, like the US, tend(ed) to be more optimistic. For example, a rethoric like the one of some candidates for US presidency seems unthinkable in the EU: e.g. in 2011 Mitt Romney stated: “My view is
that we don’t know what’s causing climate change on this planet,” or my favourite one from Sarah Paulin in 2010 is “These global warming studies [are] a bunch of snake oil science.”

The EU thus wants to undertake much stronger emission reductions than countries like the US or China, mostly because it is more pessimistic about the impacts from climate change. But this leads to what I call a `double deprivation‘. Firstly, EU citizens are more pessimistic about the future and consequently should be less happy due to this. Secondly, they are WTC more and thus have a lower level of final wealth than more optimistic people, and thus are losing out again. In contrast, more optimistic people easily free-ride on the pessimism of the others. Assuming beliefs fall like mana from heaven and are not endogenously chosen (which may be a discussable assumption), then any theory of justice would demand that the optimists should actually compensate the pessimists for their beliefs. This would lead to a situation where most theories of justice actually demand higher prevention expenditure from optimists than from pessimists! Consequently, countries like the US or China should actually reduce their emissions by much more than countries/regions like the EU. Obviously, there are implementation issues, problems with moral hazard, etc, but the basic result stands and should find more serious thought in the international debate.

What I left out in this article are social dynamics. Beliefs tend to evolve through society, over time and across individuals. Network effects are certainly relevant. This is a work-in-progress… Comments and thoughts are very welcome!

2 thoughts on “new publication: How Beliefs Influence the Willingness to Contribute to Prevention Expenditure”