No doubt there are things that are difficult to grasp. For example, if we have a headache we take Paracetamol. For us it is sufficient to know that there is an expert out there who has worked out that Paracetamol consists of a benzene ring core, substituted by one hydroxyl group and the nitrogen atom of an amide group in the para (1,4) pattern. We do not need to know all this to understand that Paracetamol reduces pain.

Similarly, we simply use a microwave and know it heats up water. We do not need to know that the microwave includes the entire SHF band (3 to 30 GHz, or 10 to 1 cm) at minimum, with RF engineering often restricting the range between 1 and 100 GHz (300 and 3 mm).

If we see the sun set in the west and rise in the east, then we know that the earth turned once on its axis.There is actually no man in the moon and the universe is actually expanding.

Of course, we don’t personally know all this. We simply believe this to be true since sufficiently many people who studied this have told us that this really is the case.

Similarly, we can never be absolutely sure that the small island Saba in the Carribbeans really exists until we have actually been there ourselves.This is obviously a real problem. While we may be able to fly to the Carribbeans to see whether Saba really exists, this may turn out to be a rather costly way of verifying the information that one obtains. Especially if one wants to verify ALL the information that is out there. We simply cannot be an expert in everything. That’s precisely the reason for which people specialize in different disciplines. There are doctors, shepards, politicians, teachers, researchers, manufacturers, admin staff, farmers, carpenters, etc. They all have very specialized information available that they themselves have obtained during their lifetime. Yet they also face the same problem as anyone of us: in topics that we ourselves are not experts in we simply need to trust the various experts that have exhaustively studied these topics.

And these exhaustive studies lead to something called scientific consensus, which essentially means that if 99.9% of all experts say that Saba exists, that the earth turns around its own axis, and that there are really microwaves in a microwave, then it is sufficiently likely to be true. In that case it then makes perfect sense for all non-experts in those topics to believe the experts.

Of course, we can also choose not to trust the scientific consensus and make up our own reality. The Darwin Awards are full of those who thought this should work out in their favor. For example, a student called Sergei often said, “I shall not die. I have swallowed poison for years, and today, nothing can kill me.” He regularly consumed small quantities of toxic mushrooms, arsenic, and cyanide salts. After swallowing cyanide he died.

So trusting scientific consensus and thereby not making up your own realities may be the better strategy for a long and happy life. However, not everyone thinks in this way. For example, while there is scientific consensus on the fact that mankind is causing further climate change, it looks like some people still try to make up their own realities. And most surprisingly is that all US Republican presidential candidate belong to this group of future Darwin Awardees.

I adopted the table below from HERE. You can see that all (im 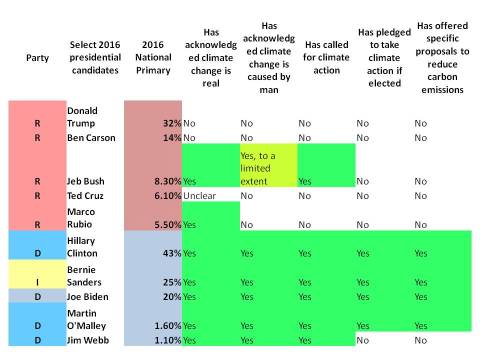 portant) Republican presidential candidates do not believe the scientific consensus and try to make up their own realities, while all democratic candidates seem to trust the world’s climate experts. I have already discussed the reasons for which republicans try to lure voters with their anti climate change positions elsewhere.

Here I would simply like to pick up a quote by Ben Carson that I just came across on Legal Planet posted by Dan Faber: “Whether we are experiencing global warming or a coming ice age, which was predicted the 1970s, we as responsible human beings must be concerned about our surroundings and what we will pass on to future generations. However, to use climate change as an excuse not to develop our God-given resources makes little sense. Expanding our wealth of energy resources, as well as encouraging development of new renewable energy sources, can provide an enormous economic lift with obvious benefits. But it can also bolster our role as a formidable player in the struggle for world leadership.”

My reply is as follows:

So what should Americans search for in their future president? Let me give you a potential answer to this question, partly paraphrasing the view of Pope Francis, and party the view of Europeans.

Pope Francis wrote that “An integral ecology is also made up of simple daily gestures which break with the logic of violence, exploitation and selfishness. In the end, a world of exacerbated consumption is at the same time a world which mistreats life in all its forms… Love for society and commitment to the common good are outstanding expressions of a charity which affects not only relationships between individuals but also “macro-relationships, social, economic and political ones”.”

In Europe, we have already for a very long time interpreted this view as one where socialism is the predominant political position. Extending unemployment benefits to all, helping the poor, a health insurance for virtually everyone, social security for everyone, a move towards a greater wealth equality – all these objectives do restrain the free market, yes, but what is the use of a totally free market if it constrains the happiness of all people but the richest? There you go, now you know whom to vote for! God bless America!